Index » News » Maisie, what we've done since the 29th June

Maisie, what we've done since the 29th June

Its been a roller coaster three weeks, between lunging her to help build muscle and hacking to see how her and Emma would get on to entering our first TREC competition.

The first week of lunging and hacking went well, Maisie and Emma were very well behaved out hacking and Maisie worked really well over the raised trotting poles, this week was certainly the lull before the storm.

With the TREC scheduled for July 12th we spent the week beginning July 6th preparing hard for the obstacle phase, we've jumped all of the included jumps previously but I had to make sure that she was confident and happy to cross the wooden bridge and to double back on herself to complete obstacles which has been a big issue in the past. We also had to navigate the incline and the descent as well as going round the barrels that Maisie normally thinks are going to eat her.

Practice week we had 3 practice sessions and every time she bucked and played up, normally I'd listen to her, accept there's an issue and look to fix it but I was fixed on getting through Sunday, I could give her time off afterwards, she'd be ok until then. Maybe going down the slope on front legs only should have been enough but I was determined to show people how far we'd come. Other than the odd small buck she was doing all of the obstacles happily and the control of paces was looking as though it should be a breeze.

Maisie had the Saturday off as I was away, so on Sunday I got to the yard early to hear that Maisie had gotten herself very worked up the night before as people came to do a course-walk. I decided then that with the events of the week and this new information it was probably going to be better if I didn't aim to ride her at all, but instead took her round all of the obstacles in hand so that she gained some good experience. The show organisers gave me the go ahead to do this and so I left Maisie in the stable and wandered down to watch the first few competitors. One of the other women from the yard was second out, unfortunately she came off her horse after one of the logs due to loosing a stirrup and the horse getting spooked by her shift in balance, however despite being trodden on, she re-mounted and completed the whole competition.

I changed my plan for Maisie, I had to have her fully tacked up and have hat, boots and back protector on even to lead her around the course so I decided that if she was calm being led around the warm up then I should get on and see how we got on. I took her in for the control of paces, mounted and trotted down to the start. She felt fine so as we passed the start I asked her for canter, she lifted her back in protest so I asked again. This time she said no in no uncertain terms, she kicked her heels to the sky and twisted, there was no way I was staying on. Once she was caught I went up to her feeling slightly sore but not too bad and so I said that I would revert back to the original plan of going in-hand.

I jogged the mile course with her, we did every jump and every obstacle, including the immobility and the remount. She went straight through the trailer and we made good time. It wasn't until I put her back in the stable and took my back protector off that I realised it wasn't just my thumb that hurt where I'd tried to hold on to Maisie but also my shoulder. After making sure that Maisie had plenty of hay and was comfortable, I wandered off to get checked over by the paramedics, who suggested that a trip to a&e might be in order. 6hrs later I was discharged with concussion, whiplash and bruising but luckily no broken bones. 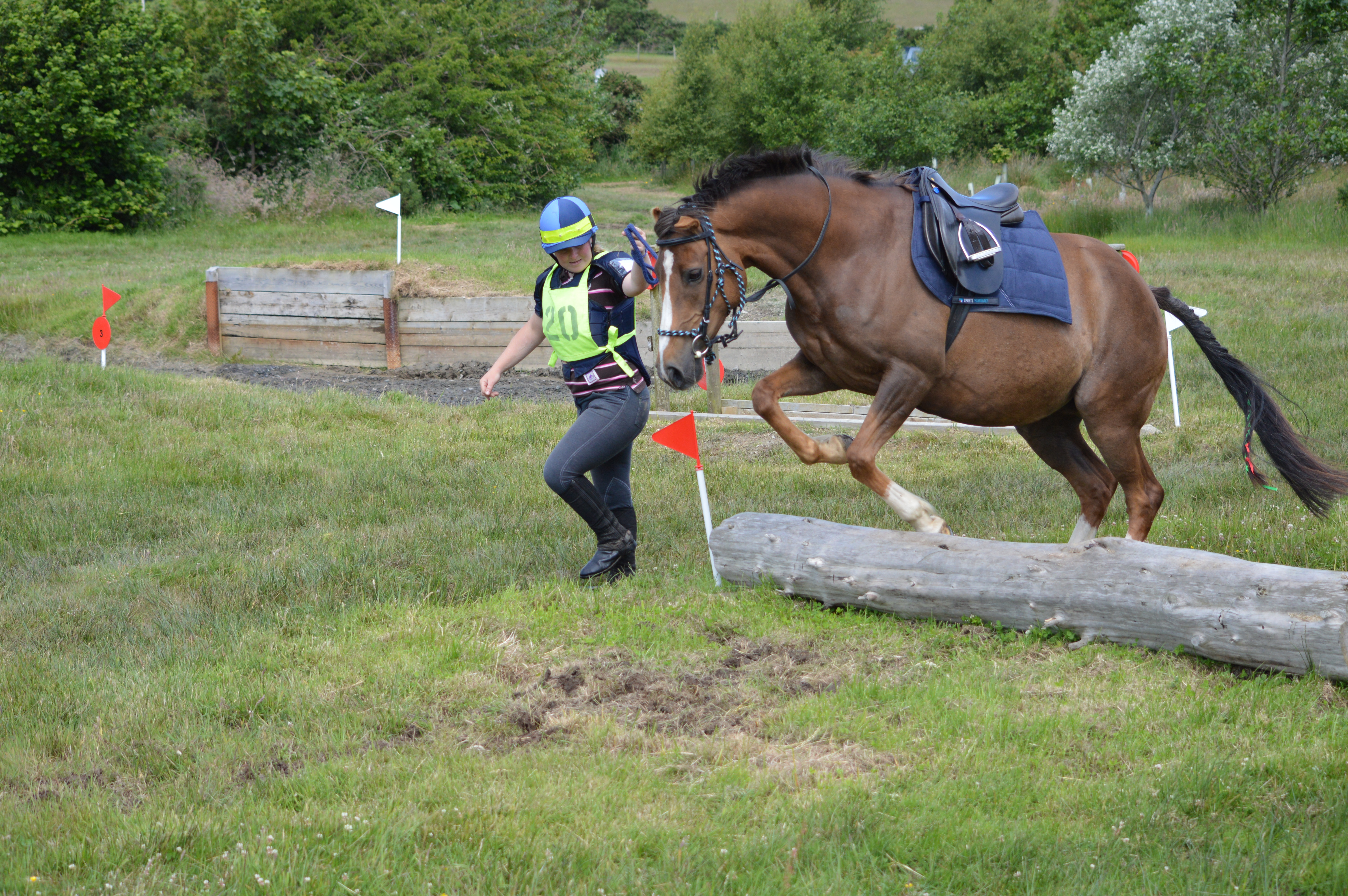 The following week I was too sore to do much other than gentle grooming, trying to apologise to Maisie for not listening and for pushing her too hard. On Thursday I decided I felt well enough to have a go at lunging her, she was very good, but it wasn't easy especially as someone had left jumps out in the arena which I was trying to navigate around. After 10 minutes I turned Maisie loose so she could have a proper stretch and a play about, normally when I do this she'll have a mad few minutes and then walk up to me quietly when invited in. Not this time, she had her mad few minutes but without invitation, she would turn and canter up to me, stopping within a foot of me and lowering her head. I finally realised how much the previous week and my fall had affected her. Especially as it was Daniel who went back on the Sunday night to feed her and turn her back out.

I think we'll go back to basics in hand this week, give both of us time to heal mentally and physically. I owe it to Maisie to take things slowly.